What are investors but natural bettors?

by Daniel Mateos · No Comments 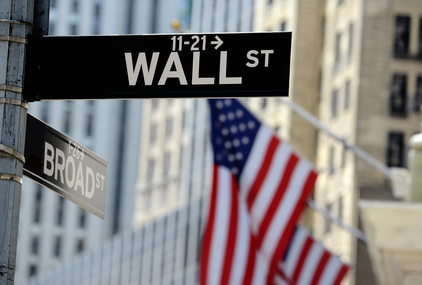 As happened on the night of the Brexit, the evolution of the financial markets and the bets odds on the next president of the USA have gone hand in hand since the first results of the polls began to be known at dawn on November 9. In fact, the more or less sudden movements began before, in the heat of the surveys that were published or the news that was known about the private emails of Hillary Clinton.

“A priori” the equity markets and the dollar looked badly a victory of the American tycoon. The uncertainty about the policy that would take place would not like the investors, who would sell the American currency and the stocks due to the doubts that their future management at the head of the White House would generate. Therefore, as it was known that Trump had many options to win the state of Florida (one of the keys, with 29 electoral votes) the dollar began to fall against most currencies and futures on indexes that anticipate the behavior of the stocks indexes fell with force. Asian stocks, open, also suffered heavy losses. For example, the Japanese Nikkei-225 index fell a steep 5.4%.

This is a clear example that financial markets are also betting markets. The investors take positions in the different financial assets betting on a certain event, that Clinton won or that Trump won.

In principle, an investor who wanted to benefit from a Republican victory could have done so by selling index futures or buying almost any currency against the dollar, among multiple options. Or what is easier, betting directly in favor of Trump and against Hillary in a bookmaker or exchange. Actually, this 2nd option is preferable, to bet directly on the event, since the uncertainty about the reaction of the financial markets to a certain news is not always clear. Although the expected reaction to a hypothetical Trump victory was the fall of the dollar and the stock markets, we have seen that after a few hours both assets turned over. Therefore, those who had sold dollars or stocks to benefit from a potential win of Trump and had not closed the operation, now would be in losses. And what is more serious, having guessed the initial hypothesis, that Trump became president.

As for the betting markets, only on Betfair Exchange more than € 200 million were matched, betting on the next president of the USA, of which more than € 65 million were negotiated on the electoral night. As can be seen in the chart, Trump was paid at odds close to 13.00 in the Matchbook exchange market during the first minutes of the electoral recount. Anyone who had trusted Trump’s victory could “have bought him” at high odds. He could even have traded and “sold” him at low odds to make cash and guarantee a sure profit, when it was already discounted that it was very likely that the multimillionaire was going to be the winner. 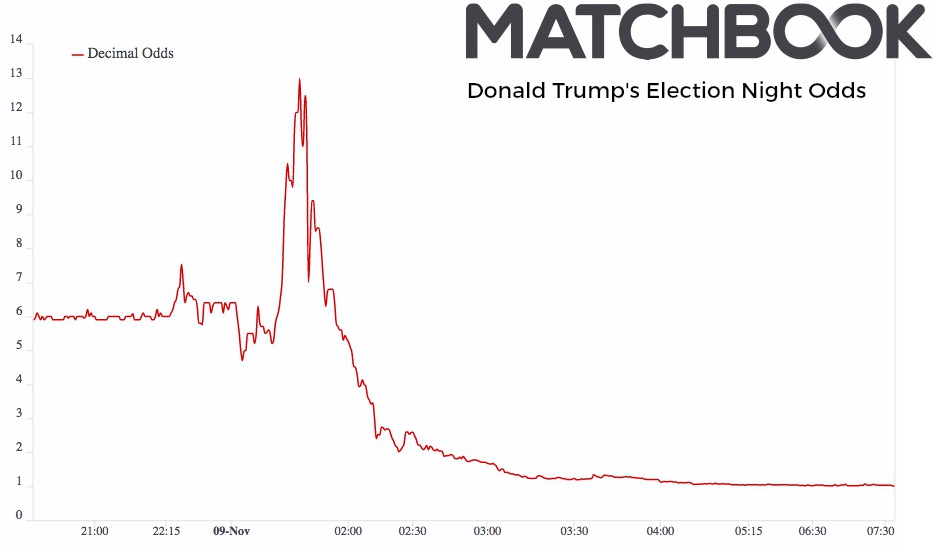 How far do we want to go? Very easy, financial markets are betting markets, but with a better public image; it’s composed of bettors with suits and ties. Obviously these presidential elections are a clear example in which financial markets and betting markets price the same information, who is the president of the USA. But leaving these elections aside, the evolution of the different financial assets is also always based on the bets made by investors. Will interest rates go up? Will this company be able to increase its profits? Will there be mergers in the sector? How will a weak pound affect the exports of British companies? How will time affect the corn harvest? Everything, absolutely everything, are bets and the prices of the assets are created based on the individual bets of all the investors that make up the market. Investors constantly bet when they make their buying or selling decisions, just like when you decide to bet on a football team or a tennis player. The reality is that the investment has a positive image, a connotation of sophistication, while the bets have a connotation of play, of roulette, of flipping a coin. In addition, as we have seen previously, the reactions of financial markets are often unforeseen; you think you may be taking a position in an asset whose behavior will be favorable if your hypothesis / bet is met but then move in the opposite direction to what you expected. This can be seen in the Eurodollar chart. During the electoral night the dollar fell sharply (it went from 1.10 to almost 1.13) but when the victory was confirmed it practically returned to the starting point. Whoever sold dollars in the middle of the night is losing money. 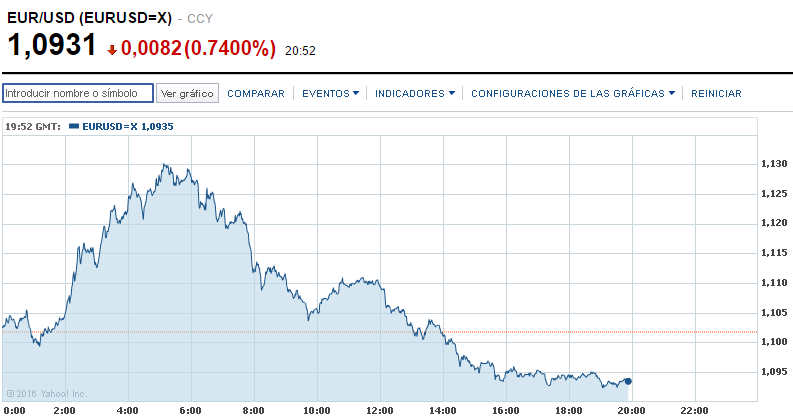 The writer has managed money in both worlds and I can clearly say that for me it has been less difficult to make money betting on sports than in the financial markets, which for me for years are more a Casino than anything else, by much technical analysis or fundamental analysis you know. When trading machines, programmed by complex algorithms, cover most of the operations, it is not easy to beat the market, quite the contrary. It is true that in general, when sports betting the probability of making money is lower because the margins of the bookmakers are higher than those carried by financial brokers. The piece of cake that the operators take is higher in betting. But basically both worlds are similar, it’s all about betting. Performing a fundamental or technical analysis to buy and sell shares has more cache than analyzing the information in order to bet on a match. The first thing usually done by men with ties who earn a salary for it, the second by young guys who want to earn extra money; but in the end, it is absolutely the same, betting.

In short, what are investors but natural bettors?