Do NOT bet on the underdogs in the Tennis Grand Slams!!

In the above charts we have analysed the results of frontrunners vs underdogs in all the ATP tennis matches in the last decade (2010-2018). The objective has been to test whether there are significant differences between the grand slams matches, played to the best of 5 sets, and the rest of matches, such as ATP 250, 500, Masters 1000 and World Tour Final Series, played to the best of 3 sets. That is, is there any particular pattern in terms of favorites vs underdogs in grand slams vs the other tournaments that can be interesting from a punter perspective?

We have made our analysis with Pinnacle Sports closing odds (the most efficient lines in the indutry) and a level staking scenario. We have removed the games where the closing lines of both players were the same (as there is not favorite nor underdog), the games were the 1st set wasn’t completed (as these are void bets for Pinancle and most of the bookies) and those matches with missing odds for any reason. This makes a total of 23,190 encounters in the period 2010-2018, of which 4,506 are grand slam games and 18,684 ATP 250, ATP 500, Masters 1000 and World Tour Series matches (formerly called the “the Masters Cup”). Our data set was gathered at http://www.tennis-data.co.uk/ and does not include the Davis Cup games.

In the light of the above charts and table we can draw the following 2 conclusions:

1. There is a clear favorite longshot bias effect in tennis betting. The favourite-longshot bias is a tendency to overvalue longshots and undervalue favourites, mainly because bettors overbet longshots and bookmakers shorten those prices in excess as they know bettors’ demand elasticity is much lower at higher prices. You can read more about this bias it this article written by Joseph Buchdahl for Pinnacle Sports. In our data set of 23,190 tennis bets in all ATP tournaments the ROI for favorites was -1.6%, while the ROI for underdogs was -6.3%. It’s clear that, although betting on the favs produces losses, betting on the dogs is a total disaster. In the table below we have calculated the distribution of the underdogs’ results by odds range and it can also be noticed that the higher the odds the more negative the yield. It’s above 3.0 odds aprox. when the negative ROI gets higher, the higher the price. The magnitude of the sample is large enough to prove that the favorite longshot bias in Tennis betting exists, as it could not be otherwise. 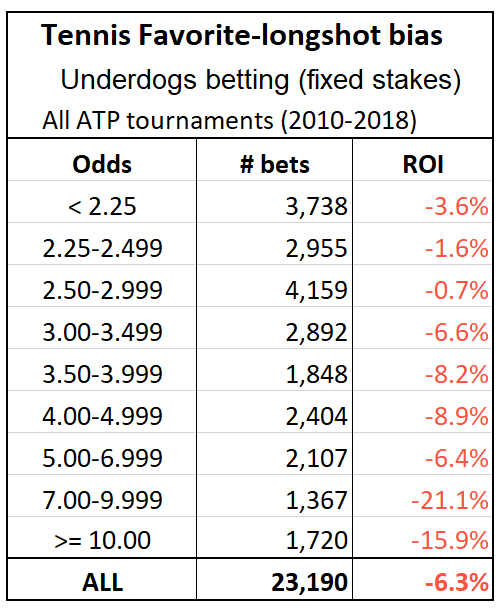 2. As a rule of thumb do not bet on the underdogs in grand slams. In the long run you’ll save money if you refrain from doing so. Just do it if you are very sure (if anyone can be sure of anything when betting) that there is underlying value in any specific underdog bet. We can affirm this because the difference between the favorites ROI and the underdogs ROI in grand slams vs the rest of tournaments is extremely significant. That is, we can see that there is something more than the favorite longshot bias when analysing the grand slam data. We could have even achieved positive results if we have bet always on the favorite (ROI +0.9%) -it doesn’t prove it’s a profitable strategy for the future though- and huge loses (ROI -16.1%) if we had done it on the underdog. The size of the sample (4,506 bets) let us state with a high degree of confidence that in matches played to the best of 5 sets the better players are less likely to loose than in best of 3 sets games and therefore that favorites upsets are much less likely. And what is more important, that this fact is far from being reflected in the odds. Big underdogs’ odds are, on average, much lower priced in grand slams than they should be.

To sum up, we can affirm that if you bet generally on the underdogs in grand slams you are betting against 3 factors: 1) the standard bookie margin  2) the extra “favorite longshot bias” bookie margin if your underdogs are longshots with prices higher than 3.0 aprox and 3) the “best of 5 sets” factor.

In the 116 matches played until today in the current Australian Open, although it’s a very small sample, this trend seems to continue. +2.3% ROI for the favorites and -29.5% ROI for the underdogs.

One thought on “Do NOT bet on the underdogs in the Tennis Grand Slams!!”